When you think of the NBA, you think of stars. During the early 80’s, there was Magic Johnson and Larry Bird. They were in classes of their own. Soon to come, Isiah Thomas came to join the show with the Bad Boy Pistons. You can honestly say that they were the faces of the league. That is until who many consider the GOAT came into the league. In the late 80’s and early 90’s, those were known as the Jordan Years. Michael Jordan’s record of 3 Peating is truly something amazing. But what makes it really special is the fact that he did it twice. His success made him “The Face of The League.” When MJ retired, Kobe came and took the league by storm. He had became the face of the league. After Kobe had won a few titles, the “King” Lebron James had began to blossum and he has knocked on that door of being the Greatest to ever play the game. That’s a topic for another day. But I will say this. The Decision which aired almost exactly 10 years ago from today was the right move to make Although it didn’t have a longterm affect for success for Lebron. But what if D-Wade’s knees held on a little longer. What if Chris Bosh never had the heart problem that forced him into retirement. Lebron may have as many rings as MJ at the end of the day if it wasn’t for those hiccups. Speaking of Lebron, the King is now 35 years of age. The clock is ticking for him. He has been the face of the league for quite sometime now. Guys like Steph Curry and Kevin Durant have been amazing throughout the King’s reign over the league. But with the injuries they both have suffered over the years, I’m afraid they may now be on the wrong side of 30. The NBA is the best brand of basketball in America. Each and every year, there has been a face of the league and sometimes faces of the league. But who will be that face of the league once Lebron calls it quits???

Well the best up and coming players are Luka Doncic and Giannis Antetokounmpo. Giannis has already blossomed. But the scary thing is he’s still getting better and hasn’t reached his peak yet. The show is just now getting started for Luka and as amazing as he is, he still has a long way to go and is now only scratching the surface. The best up and coming players are international players.

Disrespect comes in many ways. It can be direct and sometimes even indirectly. Well the NBA will be looking for the next star to possibly take Lebron’s throne. But how can the face of the NBA be an international player? Damian Lillard of the Portland Trailblazers has been putting on quite the show the last couple of seasons. His numbers are through the roof and he actually has won a couple of big games in the playoffs too. His play hasn’t gone unnoticed as he has been announced as the coverstar of the successful game series NBA 2K21. But there’s one small issue here. He is only going to be on the cover of the old gen systems, XBOX ONE and PS4. New Orleans Pelicans Rookie F Zion Williamson will be on the cover of the next gen system’s version of 2K21 (XBOX Series X and PS5). Zion has missed 2/3 of his rookie season and he is already on the cover of the best basketball game in the world for the newest systems coming out too? The NBA is heading in a very bad place once Lebron retires. Stardom is clearly being forced here on Zion. He has some talent, but not a lot of skills. He hasn’t played much in the NBA and has only provided to us a sample size due to his inability to stay healthy. He hasn’t won anything or even done anything that made us all say that was a nice play. This kid has heart he’s going to be special. The dunks are fun. They get people out their seats. But those dunks aren’t going to win you the big game. You can ask Blake Griffin that. How are things working out for him in Detroit? By no means am I calling Zion a bust. But I along with millions of others can say that Zion is an undersized big man who can’t stay healthy and hasn’t done a thing to deserve to be on the cover of the next gen’s video game console biggest game coming out this Holiday season.

In the NBA, we are seeing hard work and skill doesn’t pay off. The only thing that matters is talent. Being able to jump out of the gym. As I mentioned before, the dunks are fun and hearing a few ooo’s and ahh’s are nice. But if I’m a GM building an NBA Roster, I’m taking Damian Lillard any day of the week. Even if he is hurt. Yes, Dame plays hurt he’s a true Trailblazer. Stardom is clearly being forced on Zion. And I’m not saying that’s necessarily a wrong thing. All I’m saying is give the man time to see if he’s cut for the job because all we’ve seen were a few dunks in a few games from him. 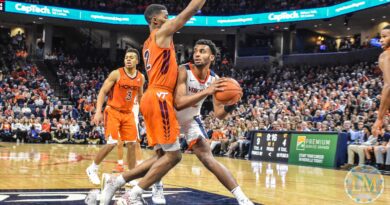 Truex Jr. continues his Recent Domination at Virginia tracks with win in Martinsville (6-10-20)