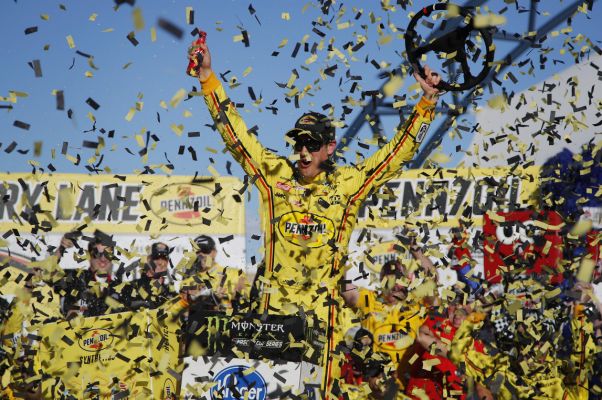 We enter Las Vegas on an extremely green track. After rain the Cup cars have not been on the track for right around forty-eight hours. We start this race with Daniel Suarez having issues with his car staying under power. Therefore, lap one will end under caution. Most cars were three wide during that restart. When we came back from restart we had contact with Martin Truex Jr amd Kyle Larson. Most car did take the competition caution to make needed changes and get new tires. From there while we had some bumps and worries most cars started to settle down into the racing groove. As we went into the closing laps we saw Chase Elliott truly putting out some of the fastest laps that enable him to move through the field. He moved through the field so well he ended up finishing the first stage winning.

We started stage two three and four wide trying to make moves. Chase Elliott did not have the best restart and ended up in the middle and went backwards some before settling into a position. This allowed Kevin Harvick to take the lead. Christopher Bell made an awesome save after Bubba Wallace got into the back of him while only loosing two spots. He was able to keep from bringing out the caution. However, Chase Elliott still showed how amazing his long race speed is and moved back to the front to win stage two.

We enter the third and final stage and this is where all the action is truly going to happen as drivers race for a win. Martin Truex Jr opens the third stage and makes contact. That contact causes a tire rub that will eventually caused him to hit the wall and bring out a caution. Several drivers decided to make the move and come to pit road with that caution. Changing their pit strategy for the rest of stage three. We continue with the race and we had multiple battles going on throughout the entire race track. Chase Elliott made his way again to the front. But that would soon come to an end because a valve stem on his right rear tire was knocked off. This caused his tire to go flat and hit the wall. This will remove him from the chance to win at Las Vegas. A couple more people have had some bumping into one another, which is cutting tires making tires a big thing in stage three. We make it for the most part until the last couple of laps where things truly heat up. We had a late race caution where the dice was rolled. We had multiple drivers pit and multiple drivers stay out. This gave us a two lap shootout without going into overtime. There was contact on the last lap that cause a tire rub on a couple drivers. The race ended under caution with Joey Logano the unofficial winner since he had seen the white flag.