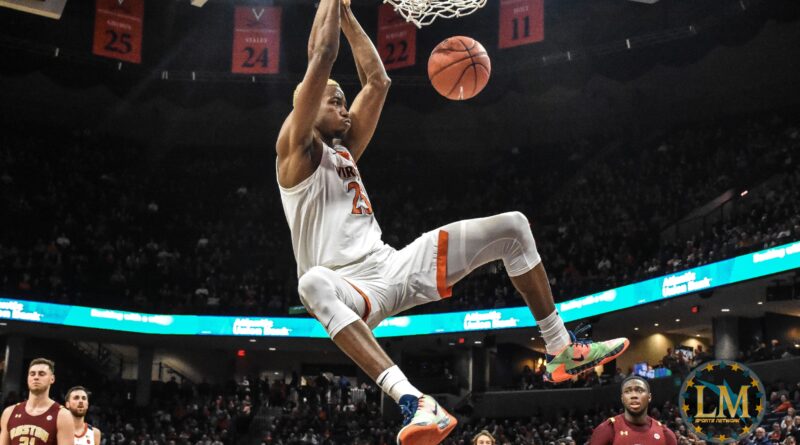 Wednesday’s matchup between Virginia & Boston College was the 2nd time the two teams matchup this season. In-game one, Boston College defeated the Virginia 60-53.  UVA trailed by double digits early in that contest but battled back in the second half only to fall short. BC’s Jay Heath had scored 17 points while going 3-for-5 from behind the arc in that victory. Braxton Key was the leading scorer for the Cavs with 16 points. Both teams came into round two on different paths. Virginia had won 5 out of their last 6 games including the last two which were thrillers. Virginia defeated Notre Dame at home 50-49 in overtime and last Saturday defeated North Carolina 64-62 on a Tomas Waldetensae 3-pointer with 0.8 seconds left in the game. Waldetensae led the Cavs within 18 points all from 3-point land. Boston College has hit a rough patch since defeat Virginia in the first game. The Eagles at 4-7 since that game. Eagles were looking to regain the energy they had earlier this season when they faced the Cavs and the way this game started you would have thought they had.

Virginia and BC battled early but with 11:54 left in the first half, Virginia would take the lead for the last time in the game. With one of their best shooting performances of the year, the Cavs went on to win 78-65. UVA shot 26-for-45 (57.8%) the field, Braxton Key & Kihei Clark scored 17 points leading the Cavs. Jay Huff & Tomas Waldetensae both scored 14 points and Madami Diakite collected 10 points. It was the first time this season all 5 starters scored in double figures.

“I think to have five guys in double figures, the emergence of Tomas [Woldetensae] shooting the ball, the efficiency of Mamadi [Diakite] and Jay [Huff] shot it well today. That certainly helped. I do think we are trying to run good stuff, and we are a little smoother and more efficient with it, but it certainly makes a big difference when you make some threes. I thought we had a decent balance like we did last game, but you never assume anything offensively. That was my message to the guys. This is some really good offense, but whatever you do, don’t get too comfortable.

Boston College’s Nik Popovic led all scorers with 22 points and he also grabbed 7 rebounds. Jay Heath chipped in 18 points for the Eagles. The Eagles fell under .500 after this game moving to 13-14 on the season.